I grew up a sports fan. My dad was a coach and I spent most of my formative years on some kind of sideline. I played basketball and ran track, but I loved watching sports of any kind. I liked to pick apart the strategy, the coaching decisions, the execution of the game plan.

Some of my earliest football memories include watching LSU football games at Tee and Paw’s (my paternal grandparents) house. My grandmother pulled out her pompoms and cheered like they could hear her. I laugh because my husband does that now, not the pompoms but the cheering and clapping for the Tigers whether he is in the stands or on the couch. I did not attend a football college, so I adopted LSU as my team. Now I watch my children cheer on the Tigers, three for LSU and one for Auburn, but all Tigers. 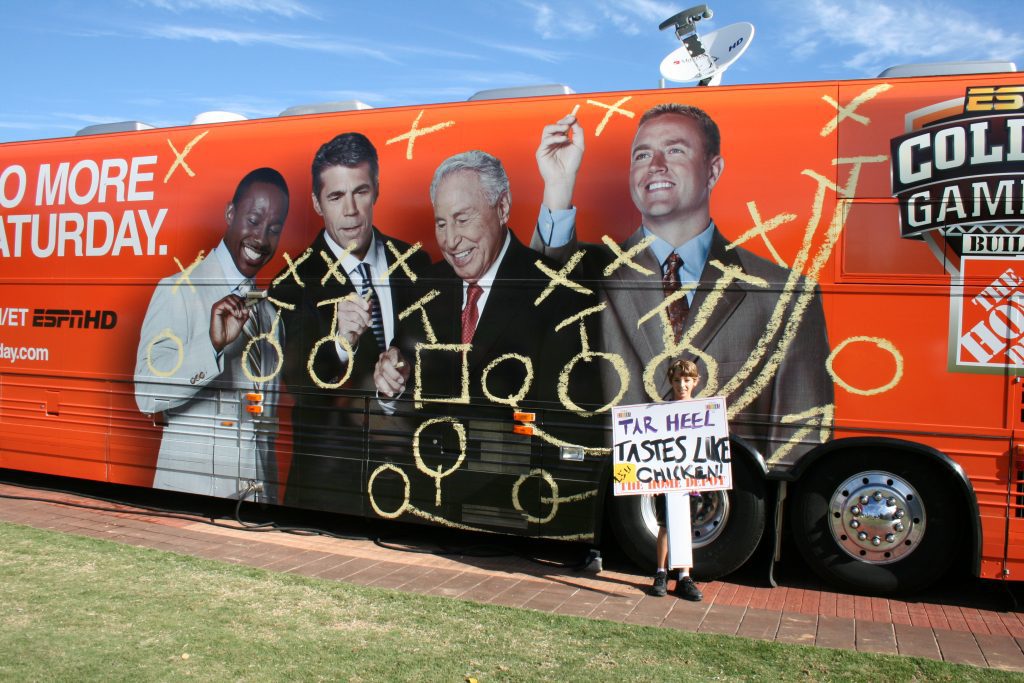 It’s been difficult at times to be an LSU fan, but Joe Burrow, the 2019 undefeated season and National Championship erased those bad memories. I could write an entire post about that. Instead, let’s talk college football in general– the history, the traditions, the venues, the rivalries, and so on.

A game with humble beginnings has grown into a multi-billion dollar industry.

In the essence of full disclosure, I must admit a preference for SEC football. Yes, born in Texas, I never really developed a love for either the University of Texas or Texas A&M. Our move to Louisiana and my formative years’ introduction to LSU led to my adoption of them as “my team”.

The deal was sealed when I attended my first game in Death Valley.

Tailgating at LSU is not “The Grove” of Oxford, Mississippi. Instead of tents with chandeliers and catered meals, one will find pots of gumbo and jambalaya, ice chests teeming with ice-cold beer, and creative modes of transportation, like converted trailers and flatbeds in purple and gold. Years later, when I tailgated in The Grove for the first time, I felt really out of place.

I love a good marching band, especially the Golden Band from Tigerland. Before each home game, a perfectly silent band enters the stadium from the south end zone. The band then marches out to the beat of a single bass drum. The entire band stands at attention waiting for the percussion introduction to “Pregame Salute”. After saluting each side of the stadium, the crowd roars and the band breaks into “Touchdown for LSU”. I get chill bumps every time and never miss this part of the game.

Perhaps the coolest band traditions in college football belong to the Ohio State University Marching Band. While playing Robert Planquette’s “Le Régiment de Sambre et Meuse” the band completes precise moves which leads to the formation of “Script Ohio”. The “dotting of the i” remains an honor, usually reserved for the drum major and senior sousaphone player. However, Jack Nicklaus, Woody Hayes, and John Glenn were honored with “dotting the i” as a show of respect for their accomplishments. 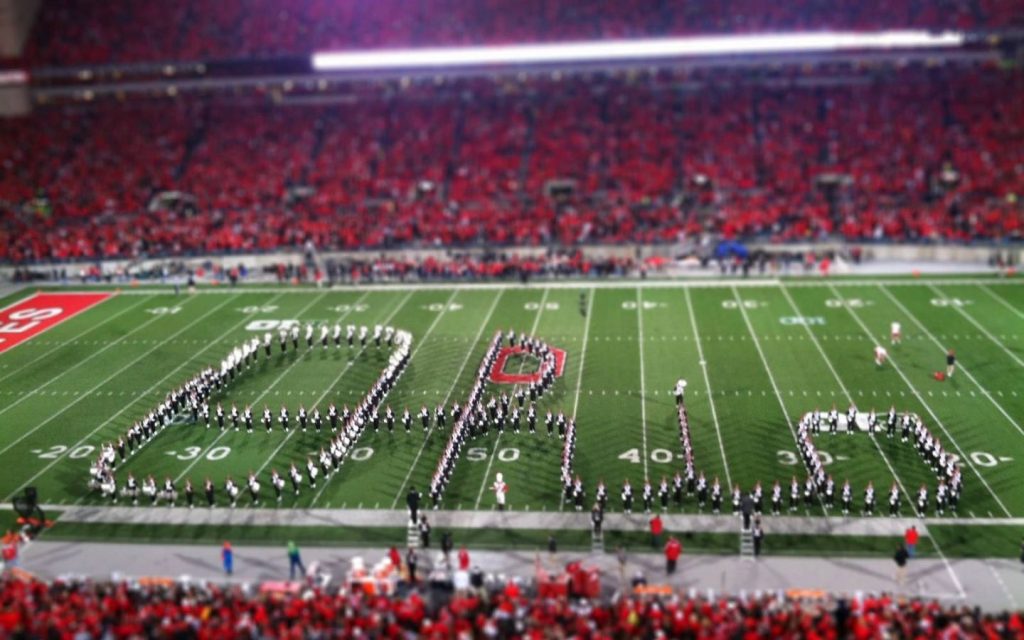 Mississippi State fans ring cowbells in the stands, Arkansas fans call hogs “pig sooie” and Auburn faithful toilet paper the trees in Toomer’s Corner after a Tiger win. Good rituals, but I think there’s one that stands out even more.

Do you know the history of the 12th Man at A&M? The tradition dates back to 1922. In a game versus Centre College, the Aggies were losing players left and right. The coach remembered a squad player E. King Gill remained in the press box helping identify players on the field. The coach called him down and Gill donned the uniform of an injured player just in case he was needed on the field. At the end of the game, the Aggies led and Gill remained on the sideline, the 12th man. Over the years, the student section assumed Gill’s role and stand throughout the games in unity with the team through victory and defeat. 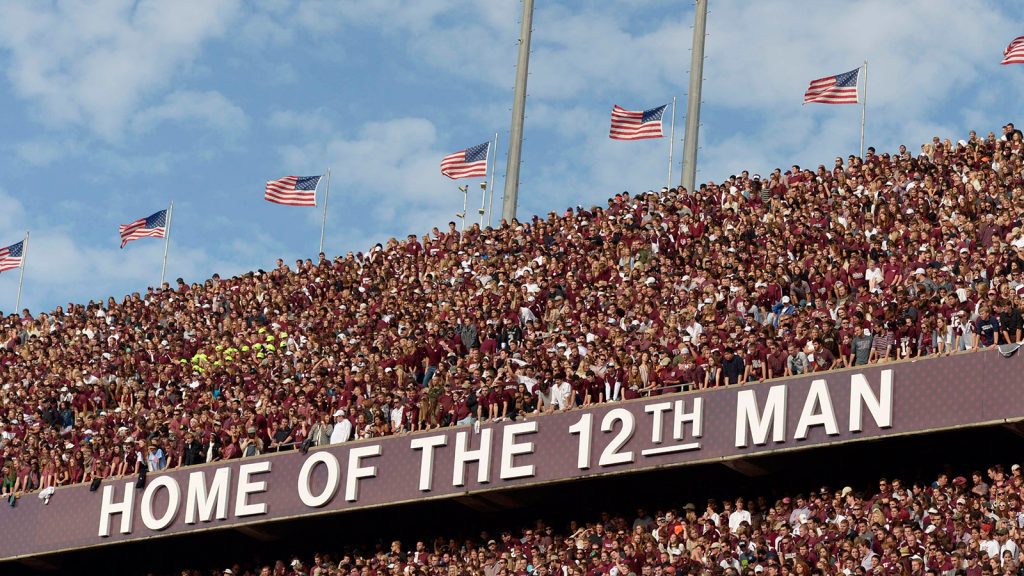 If you ask me for a list of my favorite college football players, I do not need much time to think. It’s a short list: Peyton Manning and Joe Burrow.

I admire the Manning family, especially Olivia, the matriarch. Peyton’s knowledge of the game makes him like a coach on the field.

Joe Burrow, 2019, need I say more? I will say more. I appreciate that he re-wrote his college football story through transformation and hardworking. It didn’t hurt that he did it at LSU.

When you think about legendary coaches in college football names like Pop Warner, Bobby Bowden, Joe Paterno, Nick Sabin, and Bear Bryant come to mind. These men influenced the game through their actions on and off the field. As much as I hate that Nick Sabin left LSU for the NFL, recruited Louisiana players to Alabama two years later, and built a football dynasty somewhere else, I applaud him as a coach. He’s changed the game.

The Southeastern Conference currently employs some of the most entertaining coaches in the game, just ask anyone of them. We have Ed Orgeron at LSU, otherwise known as the “Cookie Monster”. Mike Leech (the pirate) at Mississippi State, Lane Kiffen (Joey Freshwater) at Ole Miss, and so on. These characters provide us with plenty to discuss after church on Sunday and at the water cooler on Monday morning.

In the old days, if an athlete transferred from one school to another, he (or she) had to sit out a year before competing for the new school and in some cases, had to receive approval from his current coach. The idea of sitting out a year tended to stop players from making rash moves. In 2021, the rules changed and players can now enter the “transfer portal” and play immediately at the new school. I understand being player-friendly, the league has been “coach-friendly” for years. However, this new dynamic impacts the locker room and the sidelines.

Just recently, LSU’s former quarterback was on the sideline of opposing Auburn. In the old days, one rarely saw in-conference transfers. Yet, the transfer portal doesn’t pose the greatest threat to the integrity of the game, the elephant does.

The “Elephant” in the Room

No, the elephant does not refer to the Alabama Crimson Tide, but instead to the impact of money on college football.

The game changed a lot in the last 25 years. Instead of a few televised games per weekend, almost every game is televised or streamed somewhere. Networks abound from the Granddaddy of them all –ESPN to the big three, ABC, NBC, CBS. Add in FOX and the conference networks and you have more slots than games. Those slots fill the space with noise and commercials.

Bowl money and which team gets what leads to marriages and divorces in conferences with rich history, such as A&M first leaving the Big 12 for the SEC with Texas and Oklahoma right behind them.

TV money, bowl money, and donor money drive the game today. In a conversation with my husband, we talked about the length of the games today and how that is driven by commercials.  The momentum in a game can shift because a team gets a “bonus” television timeout right as their opponent looks to close the door. Coaches get hired and fired based on sometimes impossible expectations because the donors are not happy.

Now, add in NIL, short for Name, Image, and Likeness. This new program allows players to sell their NIL to sponsors or donors, without acknowledging their school by name. This will affect change in the game, make it harder to recruit players to programs that don’t have wealthy donor bases, and allow the guys that will play on Sunday to cash in a little sooner.

We will not see the long-term impact of NIL for a few years.

Going out on a High Note

At the end of the day, what unites us most in college football are the moments.

My favorite college football moment did not occur in a stadium or at a game. It occurred in the lobby of the Embassy Suites in Atlanta, Georgia. My husband, our four kids, and I just watched College GameDay in Olympic Park and headed back to the hotel to freshen up before the game. Out of the corner of my eye, I spotted my favorite GameDay host, Lee Corso. Without thinking, I ran over and asked for a picture. I think either Chris Fowler or Kirk Herbstreit stood with him. I ignored whichever it was and specifically asked for the picture with just Coach Corso. He obliged and made my day. 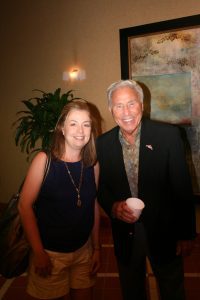 One person who probably witnessed more of these moments than almost anyone is my favorite college football personality–Lee Corso.

At eighty-six years old and co-host of ESPN’s iconic College GameDay, Corso is one of college football’s best and brightest. Yes, he’s old. Yes, he’s quirky. Despite that, I tune in every week to watch him. To see just which helmet or mascot head he’s going to slip on. Who will he crown as his victor of choice? To see how the fans will respond. He holds more knowledge about the history of this “game” than almost any living person and he entertains the viewer with his knowledge.

Ultimately, college football unites us. Unites people of different ages, races, genders. Yes, it can divide us, but not like politics.

Generations of families gather around the television to cheer on their favorite school. They share stories of coaches and games gone by. They wear their colors and sing the fight songs.

Coaches and players come and go, but we still tune in hoping for a magical season. 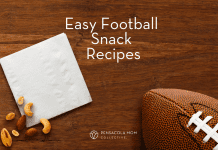