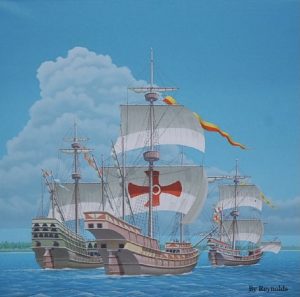 A Five-Part Series In Celebration of the 200th Anniversary of the Exchange of Flags Between Spain and the United States: 1821-2021

It’s no secret that we are in a long-running dispute with St. Augustine about who indeed is the oldest known settlement in what is now the United States!

The truth is, Tristán de Luna y Arellano landed and established what is present-day Pensacola in 1559. St. Augustine didn’t come into existence until 1565. So there is that.

Of course, the settlement here was washed away by natural forces, and St. Augustine did not suffer the same fate. Whether or not any survivors found shelter with surrounding tribes indefinitely, we cannot be certain. Yet before we lay a claim to any land or bragging rights for that matter, we must acknowledge the presence of the native peoples who predated any settlement here by thousands of years.

There have been European contacts with the land and people here as far back as 1516. In this expansive area, they were the Ochuse and the Creek Indians. In fact, we still have an active local Creek Tribe today. The native peoples were based away from the bay and traveled down to hunt and fish. The area here was wooded and dense. Due to the growing threat of the settlers’ presence, in the 1700s, the various tribes came together out of a need for protection and survival. We know of them today as the Seminoles.

Just imagine the Florida State Creek or Scots…Osceola was of Creek and Scottish heritage after all!

In swampy lands just north of Mobile is the largest remaining cultural site in the area. With about 19 remaining structures referred to as “mounds,” it was originally accessed by canoe.  It was inhabited from 1250 to 1550 CE. Another site, or “mound” near Pensacola, is about 40 miles east in Fort Walton, dating back to 850 CE.

I find it fascinating how many archaeological sites still remain even with the climate and land quality that could have otherwise engulfed much of what remains today. There is something to be said for sand and how well it can preserve artifacts. Just head down to Museum Plaza, and you can see several layers from various settlements in our local history. How fantastic is that?

Then the Spaniards began coming to the shores of the Polonza or Ochuse Bay, as the natives referred to it. This began the ‘historical era,’ which occurred over a period of decades. First, in 1516 by Diego Miruelo, then 1528 under Pánfilo de Narváez and later by Hernando de Soto in 1539. Tristán de Luna y Arellano came with eleven ships and about 1500 people to finally settle the area in August 1559. Some weeks later, in September, a hurricane came and wiped out the settlement leaving very little in its wake.

We all know how Hurricane Season can be – you can prepare for it, sure, but you’re never actually ready for the worst of it. 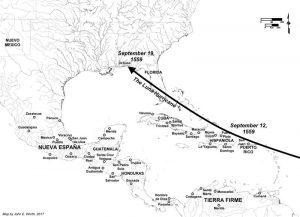 Survivors moved inland for a time before some attempted to try new territory and better luck in present-day Parris Island, SC. However, another storm hit – I mean, can you really track a hurricane?! Well, it sent them fleeing to Cuba before a return to Pensacola and later Vera Cruz, Mexico. It was decided that northwest Florida was too dangerous and therefore not traversed again for another 130+ years.

Then in 1698, a new group of hopefuls crossed the seas and came into what would become known as Panzacola Bay, led by Andrés de Arriola, the first Spanish governor. This latest attempt in what is now known as the Historic District downtown was initially set up as protection against French settlement in Louisiana. Without a King Cake in sight, it’s clear that muffuletta, gumbo, and beignets weren’t being given as peace offerings. At least not yet! 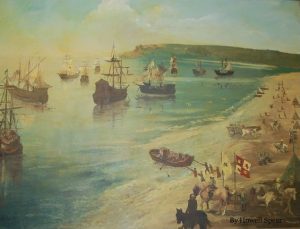 Local creole culture found its beginnings here. The Catholic Church was brought by the largely male Spanish settlers and insisted upon within the native Pensacola and the enslaved African communities. The three cultural groups mixed freely with clear distinctions of mixed-race from the start. Spanish and Pensacola children were called ‘mestizo.’ Spanish and African children became ‘mulattos’. Their location made it difficult to maintain a regular crop, and its unpopular, though short, history made it an unusual stop for supply deliveries.

To add to an already tough existence, the constant threat of the French in Mobile and various attacks from the English, the Creek, and the Carolina Raiders made things even more difficult. If they chose not to remain in Panzacola, survivors found refuge and new opportunity in Mobile or St. Augustine. 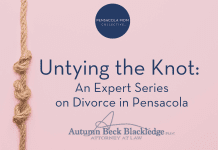 Discovery: How You Prove What You Already Know 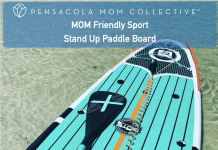 Mom Friendly Sports: A Guide to Stand Up Paddle Board in Pensacola 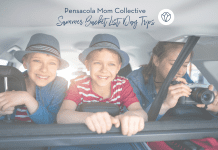