My go-to Sunday meals are usually Latin inspired. Why? They are easy, delicious, healthy, and extremely versatile. They also pack well in a thermos for lunch at home, school, or work the next day. One of my favorites is Frijoles Habicheulas Criollas, or Latin American Bean Stew.

Every culture has some sort of bean in their diet like hummus, carahotas negras, chana masala, habichuelas colora’s, falafel, smoked BBQ beans, etc. I usually go for a simple Latin American bean stew accompanied by white rice and any protein that’s easy to throw on the grill.

What makes beans so easy, you ask? For busy moms, canned beans are a winner. However, if you are a master of the pressure cooker, it should only take you about 20 minutes as well. You soak the beans overnight and cook on the stove or in a crockpot for a few hours.

Before I get into the details of this recipe, I have to let you in on a secret that saves a lot of cooking time and elevates the flavors of your home-cooked meal. My magic trick (which every Latin American knows since childhood) is called SOFRITO!

Sofrito goes far back in history, and it basically means “sautéing .” You can also call it the Latin American “Holy Trinity.” The three main ingredients are onions, garlic, and sweet peppers. The Spanish brought sofrito to America after the 1400’s, and it has become the main ingredient in most Latin cuisine. I usually prepare it in large quantities and freeze in ice cube trays. It saves me 20 minutes in the kitchen!

Sofrito can enhance any number of dishes, including: ground beef (for shepherd’s pie, tacos, bolognese sauce, chili, or burgers), soups, stews, sauces, rice, paella, jambalaya, gumbo, etouffee, and so many other ethnic-inspired recipes!

There are two ways of making this:
1. Puerto Rican sofrito- Blend all ingredients substituting ½ cup of water for the oil; OR
2. My way- Cooking it in advance as you will read below.

Finely chop all ingredients or use a food processor, and then sauté everything in a hot skillet until they are fully cooked and bright.

Hint: Start with onions and gradually add the rest leaving garlic for last. It prevents you from boiling the vegetables and burning the garlic. 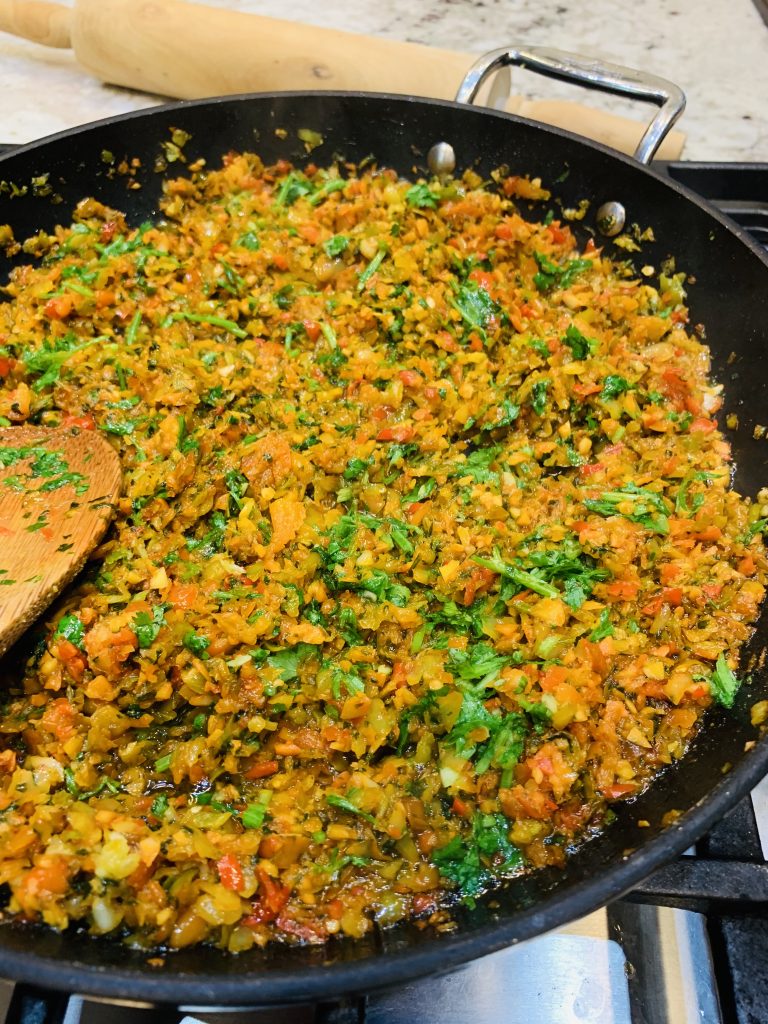 Once you are done blending your cold sofrito, or your cooked one has cooled down, you can pour it into ice cube trays. Cover them well and freeze. The next day, grab a gallon-sized storage bag to store your cubes in. You should have sofrito for days! 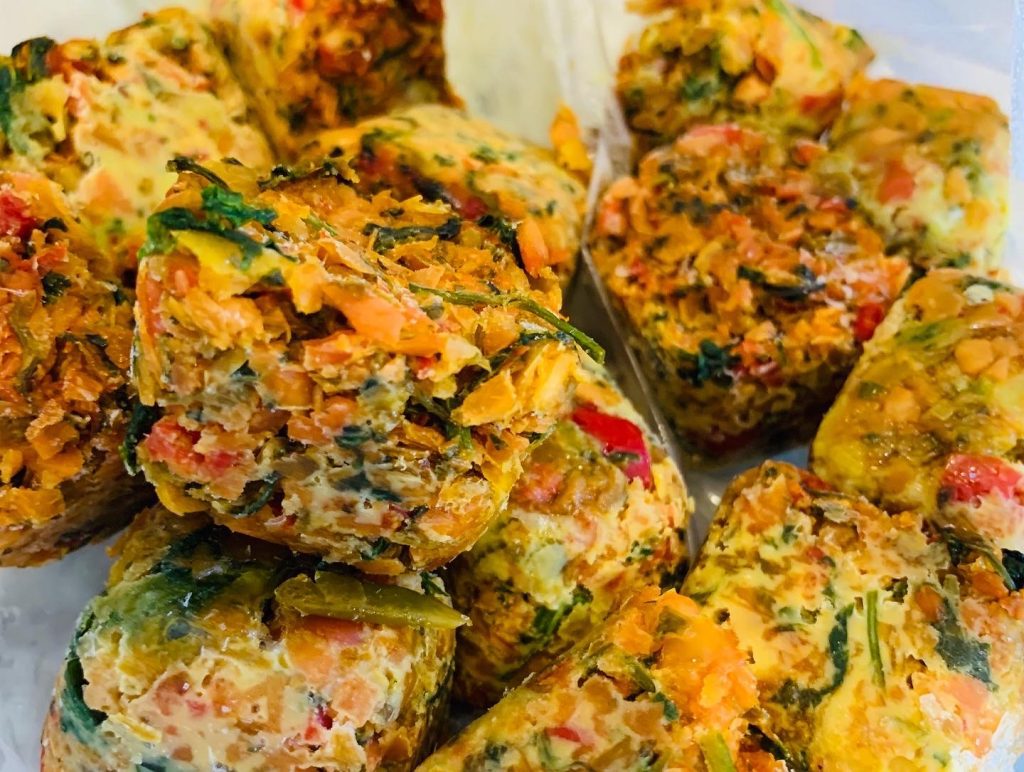 Sazon is a condiment you can find in most grocery stores. It is rich in flavor and aroma and is great for giving food a beautiful color. Its main ingredient is Achiote/Annatto that comes from the seeds of the achiote tree. Prepare in advance and store next to your Olive Oil for your daily use. 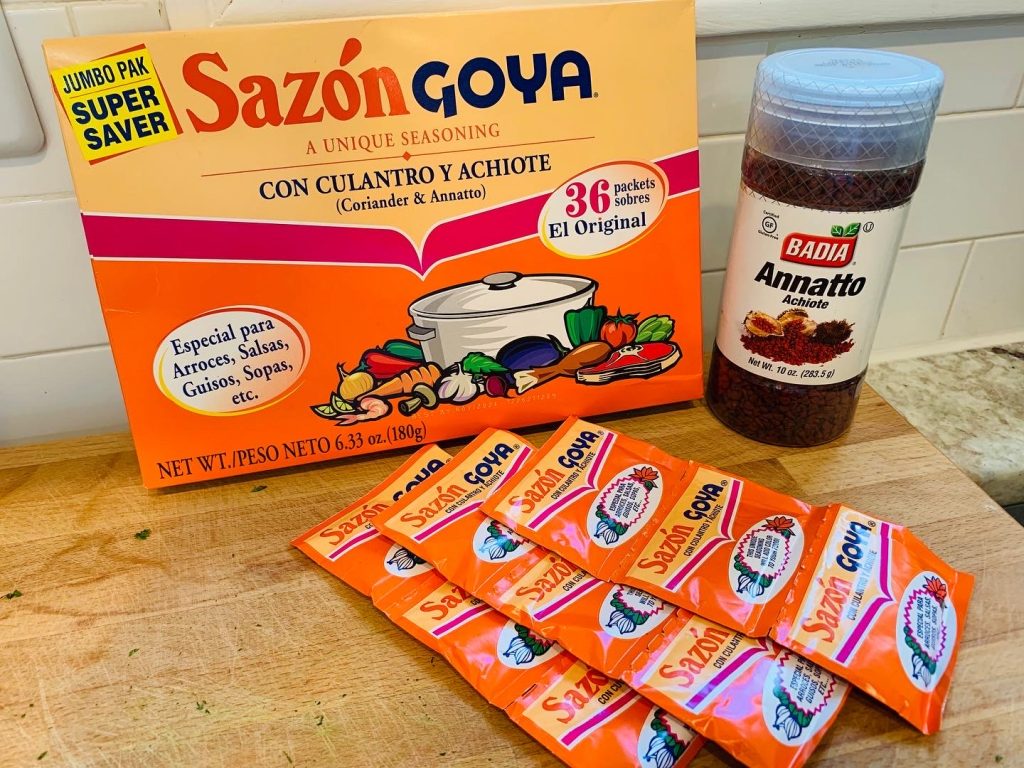 Cook at a low temperature for 10-15 minutes until the seeds release their color. It is now ready to use. Let it sit while you are working in the kitchen and during clean up, you can strain the oil into a glass jar and preserve for future meals. 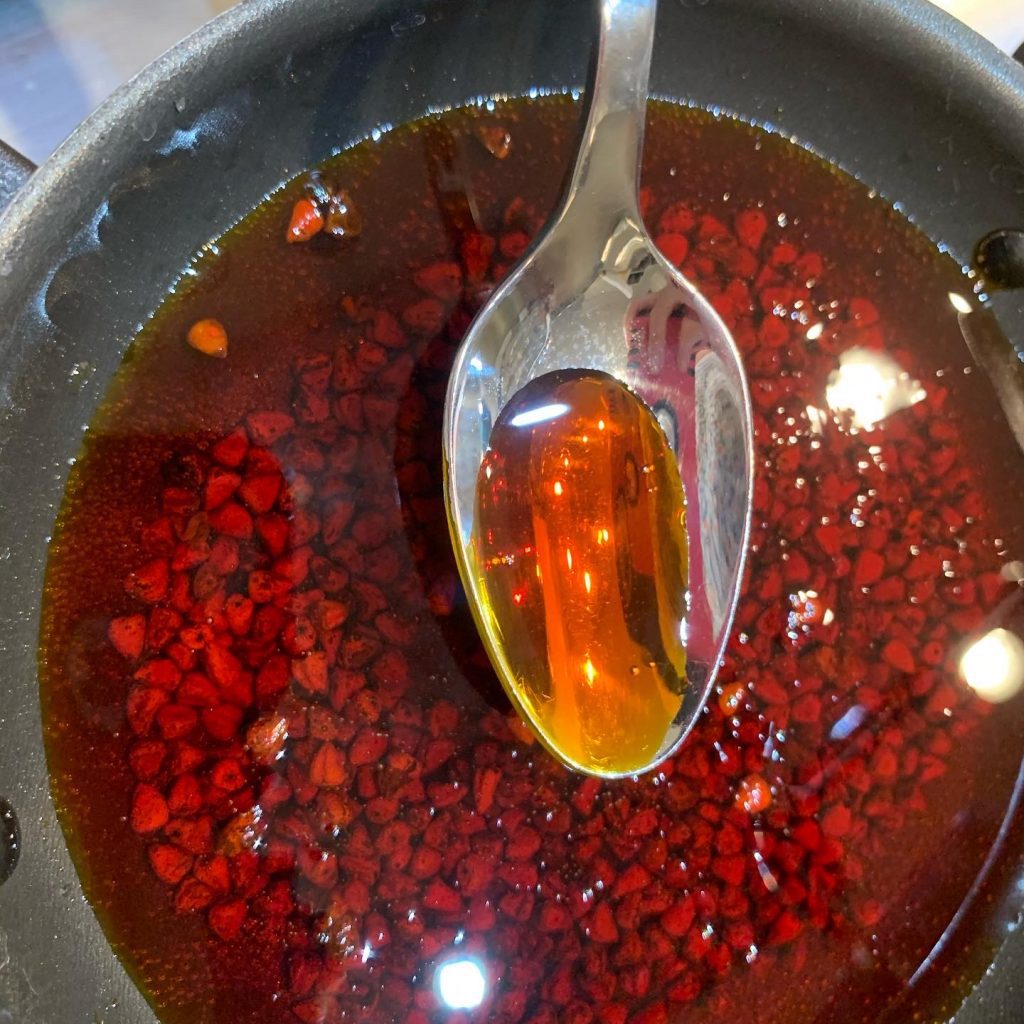 I will now cut to the chase and give you my Latin Bean stew recipe. (Later, I will elaborate on how you can reuse your leftovers. Just two words, “TACO TUESDAY!”)

2 cans of unflavored beans or 1 bag of dried beans
2-3 cubes of sofrito
2 strips of bacon or cubed cooking ham
1tsp tomato paste or a drizzle of tomato sauce
1 can of beer
1tsp. cumin
Adobo or Salt to taste
You can also throw in some cubed butternut squash, cubed pumpkin, cubed potatoes, or diced carrots. 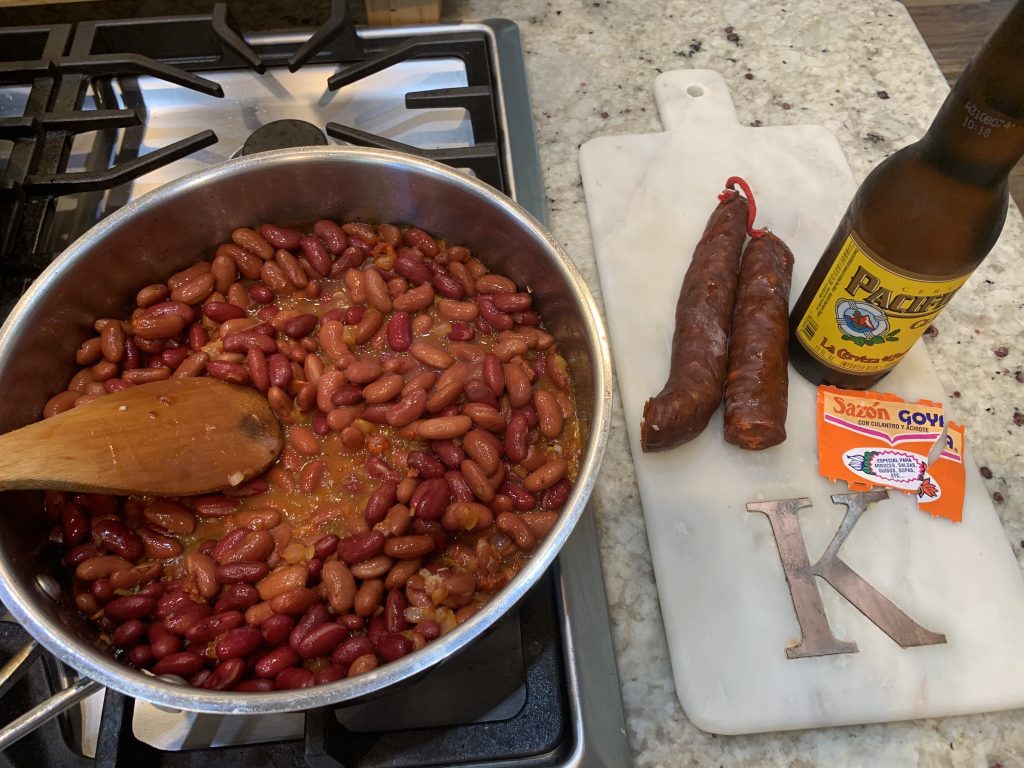 This dish will please your entire family! 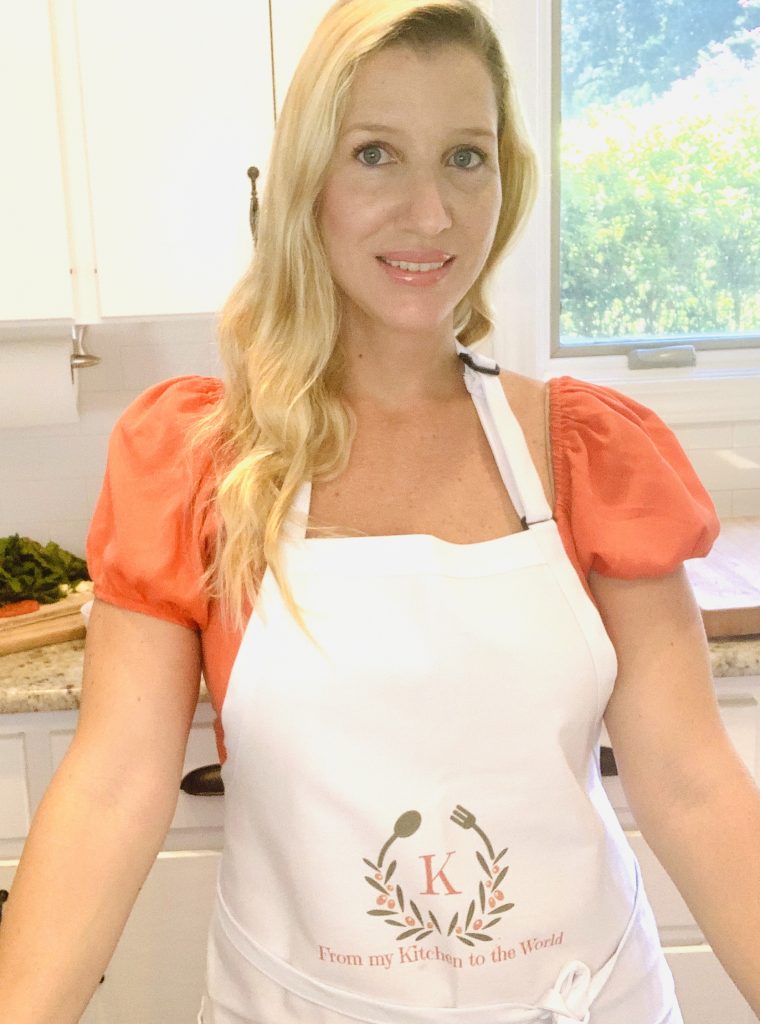 Kairym was born and raised in Puerto Rico to Venezuelan and Austrian parents and is fluent in Spanish, English, and German. Kairym studied Public Relations in Boston and Salzburg, Austria, as well as French at La Sorbonne in Paris. In 2005 she began a career in mobile marketing where she traveled 100% of the time and visited over 40 states until she met her husband while in Puerto Rico in 2009. A few months later, wedding bells rang and the newlyweds set sail to New York City where Emmanuel did his residency, followed by three years of active duty service as a Primary Care Physician at Wright Patterson Air Force base in Dayton, Ohio. They moved to Pensacola in 2015. Kairym and Emmanuel are the proud parents of Juliana (9) and Marco (6) who they are raising bilingual.

Kairym loves to travel abroad, go to the beach, dance, paddleboard, brunch, cook, and entertain. But, what she loves most is dedicating her time and energy to her husband and kids. She is the CEO of her family and no matter how crazy mom life gets, she always finds time to whip up nice dinners from scratch. Since the pandemic began in March, she has cooked more than 270 decadent meals and taken up food photography. You can follow her culinary adventures @frommykitchentotheworld on Facebook or on Instagram at Chateaucruzlischpensacola. Kairym’s mantra is: “Cooking is easier than you think!”

Three Fun (and Sneaky) Steps for Surviving the Summer Slump